There is never a good time to have a plumbing issue, and while fixing some problems can be much easier than fixing others, re-piping a home involves a commitment of time, energy, and resources. This article will look at when this process is needed and provide some tips to keep expectations realistic.

Reasons For Replacing a Water Line 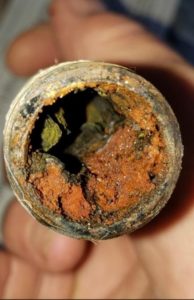 There can be several reasons why replacing the pipes in a home may be necessary. If the house is older and has lead pipes, replacing them could be a health and safety issue. Lead is a naturally occurring metal in the environment and was a common material used for water pipes in homes and businesses in the past. Because it was malleable and inexpensive, lead appeared to be the perfect metal for pipes and other household items, at least initially.

At the turn of the 20th century, concerns regarding the safety of lead were first raised, and at that time, many standard products that people came into contact with daily were created using lead. The continued use of lead piping continued until the 1970s in the U.S., and as late as the 1980s, the United States was still the world’s leading consumer of lead and lead-based products, like paint.

In 1986, the Environmental Protection Agency amended the Safe Drinking Water Act, which banned the use of pipes or solder that contained lead or were lead-based. And, while this legislation affected homes and buildings built after this point, some older structures still had toxic lead pipes.

While removing lead pipes is undoubtedly a reason to have a house re-piped, other undesirable pipe construction materials could necessitate a home re-piping. Galvanized steel was a staple in pipe construction until the 1970s. Although steel is not a poisonous metal, there were different dangers with using this material. Over time, steel tends to corrode. These lines will eventually fail and cause significant damage, which means homes containing galvanized steel pipes should be replaced where they are still in use.

Sometimes, Water Re-drain or re-pipe services are necessary to complete a household remodel. This is especially necessary for extensive remodels that include relocating bathrooms or kitchens. In these types of cases, an entire house re-pipe might not be required, depending on the specifics of the remodel.

Repiping a gas line is a standard procedure performed in houses and other structures at some point. This routine maintenance is necessary due to the erosion of the protective linings inside the pipes that cause the lines to rust and weaken over time. This weakening can become a hazard and lead to a dangerous gas leak.

Unlike household water re-piping, which will always require a professional with the skills and tools to do the job right, certain jurisdictions do allow DIY Gas Repipe for homeowners who have experience in these matters. The first step a homeowner must take to re-pipe their gas line is to check with their local authority to ensure doing so is allowed.

Gas lines will have to be located before any inspection or repairs can occur. Finding the line, verifying its integrity, and checking for leaks at joints are times when using the services of a trained, licensed professional will be beneficial. The experienced gas line plumber can provide valuable insight into the status of the pipes. Plumbers are trained to see signs of wear and tear that the average person would not notice. A prior improper installation is a leading cause of premature failure of a gas line.

Signs of a Gas Leak

Unusual hissing sounds and dead vegetation are a couple of things to look for when investigating a possible gas leak. A substance to provide the heavy smell of sulfur or rotten eggs is added to natural gas during the refining process to make it easier to pinpoint needed repairs. These are all common signs of a leak in the gas pipe, but if none of these signs are apparent, a leak could be determined by an increase in the gas bill amount.

Re-drain Services is something that no homeowner will ever look forward to completing, whether hiring a licensed professional or attempting a DIY line repair. But, performing the proper due diligence and research before starting the project will go a long way toward completing a project as smoothly as possible.

At American Drainworks and Plumbing Company, we have served the Greater Los Angeles area since 2003. We are fully licensed and can care for all of your residential and commercial plumbing needs. Call 310-390-3180 or text 310-439-4009.

If you don’t see your area, please call!